For the past 11 months or so I have heard many, many times how great “Race The Train” is. I had never heard of this race so decided to google it. Well it did sound different So, anything for a peaceful life, I decided I would train for it. Off road…. My favourite terrain. “We must train hard as it’s a tough race” I heard time after time. So I did. Mile after mile and winge after winge 🙂

The training was going well – then we had a holiday! We had good intentions of running whilst we were away (well I took my trainers anyway). Unfortunately it was incredibly hot J (happy days). Stewart’s feet swelled massively (an age thing I told him). Oh dear, not able to run- gutted (not really).

Then we came home……..only a few weeks to get fit. How is it that it takes week to build up your fitness but only days to lose it? Off we went again. Running in heat in Blackburn in July – unheard of normally and this year it was often 26-28 degrees- but we did it. Niggling, painful knees took me to the physio.  Sadly he told me I could keep on running but Stewart had to stop for a week with a heel injury. Oh boy was he cross, but to be fair he did cycle next to me when I kept up the long runs. Got to 13 miles and Stewart caught me up quickly.

Now here’s the confession…. Anyone who knows me knows how absolutely screwed up I get before any race. It’s bad enough when I’m running in a race with my friends but this time I only knew Stewart. So…….I went on line to enter, saw there was a cut off time for finishing the race and bottled out. Had a massive loss of confidence and entered the 5 mile race and not the 14 mile one. All that training L

Now anyone who has met Stewart knows he runs with a lower class running club – someone has to – you may not have heard of them – Accrington Road Runners. Don’t worry if you’ve not heard of them. Anyway, they organised a weekend away for this race so I graced them with my presence. In reality, Stewart booked our tent in and said he was taking me away for the weekend! (I need to work on that one).

We arrived late Friday evening, pitched up tent and I got to know the others. Picture the scene, two fields full of tents and camper vans, many with their running clubs flags flying- pretty impressive sight and I wished I’d have thought to ask to borrow Dashers flags.  Just being sociable I joined them in a glass of pop or two as we all sat under a large marquee chatting and laughing. Needless to say not much sleep was had that night and my race was in the morning. It was the most surreal experience. Two other Accrington Road Runners were also competing in the same race as I and they took me under their wing (well I tagged along with them) and made sure I was in the right place at the right time. We travelled on a tiny steam train with wooden carriages to somewhere in the middle of nowhere. Were dropped off and were told when we hear the sound of the trains whistle to start running. No warning, no nothing. So there we were, 150 runners in a field waiting and listening. What a lovely atmosphere. I met some lovely people whilst on the train and waiting to start. They all had stories of their experiences of “Racing The Train” in the past – some good, some bad and some very scary. But trying to be positive, they had all come back to race again.

Suddenly someone shouted that’s the whistle and people started running across the field. I have never experienced a race staring like this before. I started giggling as I followed the other runners over the first field.

After only one mile I heard a “hoot” and could see the steam train chugging along the line. Passengers were shouting and cheering out of the carriages. Runners were waving as the train passed us and I thought “well that’s that then, the train has passed and we haven’t beaten it.” Trotting along the tracks, through fords, through farms and a little bit of mud I remember thinking “this is fun.” I really enjoyed every aspect of it.  This is probably because I had done the longer training runs so it was really short for me. I had been told as soon as you reach the graveyard you have 1 mile left and that was on the road. At this point I pushed on – I had overtaken the other 2 Accrington Road Runners earlier on and I knew their favourite running was on the road so I expected them to overtake me at anytime. Sneaking the occasional look behind (not easy for me as I often fall over when I attempt this) I tried to speed up. I ran into the village, through the windy roads to see flags flying and more people lining the streets. I still couldn’t see where the finish line was though. Eventually I ran over the line, smiling for once after a race as it had been such fun. I tried not to be too smug that I had beaten the two kind people who had taken care of me earlier! Honest, I tried really hard not to grin and text my friends :-).  Accrington Road Runners were waiting at the finish and I was asked if I had really run the race as I wasn’t at all muddy and looked too happy! We were given fab goody bags and t-shirts at the end too. It was at this point I was informed the train had beaten me by only one minute. Gutted – if I had known that I would have tried harder. Apparently the train stops at different stations which is where you may catch it up. Next year I will have more of an idea of what’s happening (I hope).

A couple of hours later the 14 mile race got under way. The weather had really turned nasty at that point, it had been very windy all day but now the rain set in and it was pretty unpleasant. I watched the runners finishing, some looked very fresh, and others looked utterly defeated but what an achievement for them all. Sarah was first lady home – again! Amazing achievement.  As Stewart finished he had said earlier all he wanted was a pint of beer from the Black Bull (Tockholes –our local). I duly presented him with this as he finished and whilst others were drinking water and isotonic drinks, Stewart downed his beer and it didn’t touch the sides. Thank you to the pub for giving it to us to take. Some people will do anything for a free pint 🙂

Following a BBQ at the camp site where once again we all sat around chatting and laughing, we spent the evening in a big marquee for the presentations (two prizes, first and third ladies home for Accrington ladies – well done). Then the disco started so once again – just to be sociable – I joined in with the drinking of pop and danced (just to stop our legs seizing up!). The evening ended with us all sitting around our tents, rehydrating ourselves, laughing and chatting until the early hours.

I would highly recommend this race to anyone who likes to do something different and if you stay overnight you will not be disappointed. The atmosphere in the village is amazing, the marshals and organisation is second to none and the uniqueness has to be experienced. It was commented how good it would be if other clubs would join Accrington for the weekend – and I couldn’t agree more. It’s good to meet other runners from other clubs – not just to compete against them but to spend time socialising together. I appreciate this race coincided with one of Dashers races but if it doesn’t next year it would be great for our club to join in and those not involved in the race should really consider Racing The Train – you won’t be disappointed.

Next year’s race is on 16th August and you can already enter on line.

I would like to thank Accrington Road Runners for making me feel so welcome, they included me in everything –even when I put my Darwen Dashers vest on I didn’t get too much stick. If they ever get to read this I would like to point out I only drank pop to be sociable 🙂

PS- Update from this years Race The Train – once again I bottled out of the 14 mile race and did the 5.5 mile one (this time due to injury) and I am happy to report I beat the train!

This is a more recent photo in case you don’t know me :o) 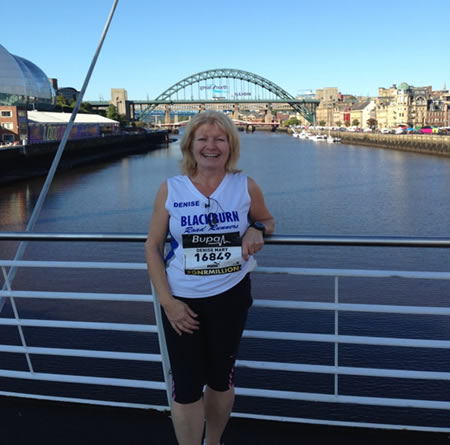 Suzanne Bell – My Road to Recovery
Scroll to top