It all makes perfect sense now…. The BRR posts talking about training plans, foam rollers, sports massage, Epsom salts, nutrition and carb loading!!!  I feel part of the club now!  I get it!  So how did the madness to run Bentham Marathon start?

When you don’t get into London AGAIN or the club ballot and your bucket list says “Run Marathon before 50th birthday” I started to get a bit anxious.  If I set myself a challenge I do it, and I was going to fail here!  So…… I saw John Clucas’s post about Bentham……the date was perfect…….and Caroline (who has proved to be my amazingly supportive running buddy) not only agreed to do it with me, but blinking booked both our places!  The challenge was on!  It was only when I actually looked into the race, the elevation and the fact that whoever I spoke to about it asked if I was completely mad, that I started to wonder what we had taken on!

Needless to say the day or two before the event my belly flipped between fear and excitement.  And ‘Maranoia’ crept in!!!!!  Then fast forward to arriving at Bentham Golf Club on Saturday morning expertly chauffeured by Mr 20 Marathon man himself Mr John Clucas, I was actually trembling!  And this was nothing to do with Johns driving!  We picked up our numbers, our t shirts and a squidgy re -usable orange beagle cup.  Fab little accessory- well worth considering for the Winter Warmer!!  The briefing started by asking if it was anyone’s first marathon to which I ‘whooped’.  They then asked for any birthdays to which I kept very quiet, however Caroline proudly shouted out that I was 50!!!! They then told us to ‘take it easy’ for the first 6 miles?  What did that mean?  Dave said it either means the first 6 are tough, or save yourself as it gets worse!

Anyhow we were taken up to the 2nd tee on the golf course to set off and surprisingly apart from a couple of mounds of opportunity the first mile was relatively downhill!  Perhaps we were mistaken about the difficulty of the course? Got a major boost at mile 1 to set us off on the right foot from 3 very noisy BRR supporters!  And then the fun began…..

So the 5 legends and I checked out the first 6 miles.  Let’s just say it was buncer at its best for the whole duration.  So we’re on 7 miles and thinking that if we had to take that easy then perhaps this was actually going to be ok!  How wrong we were!  The ‘take it easy’ comment was to prepare yourself for the real hills.

From then until mile 14 the hills were that bonkers they had named them…. ‘heartbreak hill’ ‘cardiac hill’.  Fortunately they were interspersed with brilliant water stations with a whole array of goodies on them…. It would have been rude not to take full advantage! And we did!  Our whole BRR pack re grouped at every one; and off we were again. 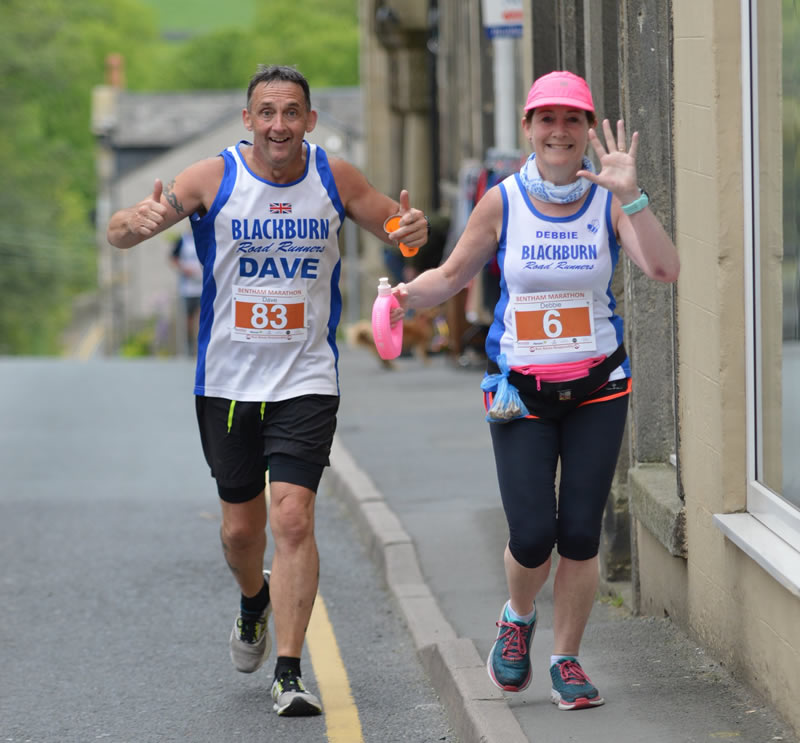 At mile 13 the route went off road across Stocks Reservoir (John was in his element!) and our cheering roadies popped up again, refilling our electrolytes and disturbing the locals with their ear splitting chants.  The route continued to the one and only portaloo on the course and another fabulous bunch of BRR roadies popped up!  Armed with a 50th birthday banner which had me in tears, they once again boosted our spirits and cheered up the water station marshals! So we were over half way but the worst and best was yet to come.  This was tough but was just brilliant.  The banter and support from the legends and the supporters actually made it fun!  So off we were again up, up, up and away!

For anyone who has ever done leg 2 of the Bradford trail relay I’m going to call this next section the ‘turkey hill of terror’ as that’s what it was for the next 1 ½ miles until about mile 17! It was head down, on tip toes and just power through the pain.  But we did it!  The views were spectacular!  The sun came out, we could see the three peaks in the distance and John was convinced he could see Pendle Hill!  He even tried to convince us that if we kept running we’d eventually reach Darwen Tower!  Every road leads there apparently.  I can’t explain the amazing feeling we had up there.  The views were spectacular and the roads meandered through the hills for miles in front of us.  We were a true team, and that’s what made the whole experience so amazing.  I kept expecting the dreaded ‘wall’ to kick in, but it never did.

There was a point at around 22 miles when we saw pink sheep and blue sheep.  Dave saw a sign for Wetherspoons.  John spotted a psychedelic ice cream van which he started running after to order six 99 cones.  He even said that we were so high up, that God had spoken to him!  I think by this point that we were probably all hallucinating…… we never worked out if the sheep were real, we think Dave’s sign actually said ‘Bentham’ and the ice cream van was a caravan when John got there!  And God?  Well he was probably telling us he didn’t want to see us yet!

A photo that was shown of us all at the water station at mile 24 (after the event) looks like we were having way too much fun and were actually having a ‘jolly’ rather than running a marathon!  So we had two miles to go.  Two miles and I’d have run the furthest I’d ever run!  I was starting to get excited for the finish but we had a final climb before we could hang up our trainers.  At the 26 mile mark, we made sure we were altogether….we had made a pact to all finish together and that’s what we were going to do.  We rounded the corner into the Golf Club and took our last victory strides in one long blue and white BRR line up!  The feeling was incredible!  I was bouncing!  Karen, Debs and Jen were there to cheer us in and present us with our medals.  It was a memorable moment.  That was until Caroline realised that her watch hadn’t clocked 26.2 miles yet.  So what did we do?  In true BRR style we set off running again, down the road and around the car park until her Garmin pinged 26.2 miles!  I was so high, I felt like I could run the course again!  It was a fabulous experience with fabulous people and I couldn’t think of a better way to spend my 50th birthday!  And I came 54th!!!!!  In a marathon!!!!  It is an experience I will never forget!