Not one to run a marathon with crowded streets you would ask why on earth would I even attempt to get a place in what is arguably the most popular and crowded marathon in the world. Truth is…as a runner you’ve got to do it – even if it’s only once.

I’ve done lonely marathons, usually with my good friend Tim Calcutt, former Road Runner and all round great chap, however I was lucky enough to get a place in what could be the noisiest marathon ever and, knowing just how sought after places are, it would seriously have been rude to turn it down!

My preparations for London started a year before when I was sitting on a beach in Australia. I decided to take my family – Dad and his wife, Sister and Brother-in-Law, my brother and my husband – with me down to London. My Dad has been a true constant in my life and not one of my family has ever shirked supporting me in my mad pursuits; if this was going to be as people had said it would, I wanted to share the moment with all of them.

So off we set on Friday morning to a lovely flat in Kensington which ended up with 11 of us in – I think I can safely say a fabulous time was had by all and the marathon was incidental for most!

A pre-marathon meet-up in Mayfair was just the ticket on Saturday evening. Lorna, Jimmy, Sally and Liam were meeting us there and then coming back to our flat with us and there was lots of talk about times and strategies between runners. What a great bunch of people and I was so pleased that I’d dragged my Dad along – not sure his legs were though after a day around London (well he is 74!).

I arrived at the start and met up with my lovely running buddy and very good friend for many years Sarah Fitch. We laughed and talked, used the she-wee’s (and managed a conversation over them!) and then entered the start pens. Much to my relief the start is not as I’d imagined…almost an anti-climax to all of the build-up most would probably say, but it’s very relaxed and no-frills – just what I like.

I can’t really explain how we set off other than a lovely man walking through us all telling us that we would be walked to the start line and “please start running when you’re ready – this marathon will start on time”. As we walked to the start gantry Commander Tim Peake set off on his marathon on the Space Station – truly brilliant and it sent a real tingle up the back of my neck; for the first time all weekend I realised I was just about to run the London Marathon.

I’d love to go into lots of detail about the run, mile by mile, truth is it was literally over before I had time to think. I cried – probably three times along the route. Andrew, my brother was hopping on and off tubes to catch a glimpse of me at various points and I saw the family, Sally (she was very loud!) and BRR (but mostly lovely Andrew Boardman with his sign) on Narrow Street. It was over before I realised. The organisation at the end was so brilliant I cannot begin to explain other than my finisher photo was taken literally 3 minutes after I completed the race and I found my brother 8 minutes after – just amazing.

I had a lot of people to thank after the marathon, most of which I’ve done but I’m so fortunate to be part of a lovely running family which seems to grown week by week. I don’t get to come to the club every week and I train a lot with my fantastic friend Lorna Bowes – just because she will put up with me, but being part of BRR and knowing that there is a community there has always inspired me. I’ve travelled the length and breadth of Lancashire and Yorkshire thanks to Norma Smith and been to places for marathons that you wouldn’t think were big enough and I’ve loved every part of my journey so far.

And remember ‘Running never gets easier, you just get stronger’

So thank you x 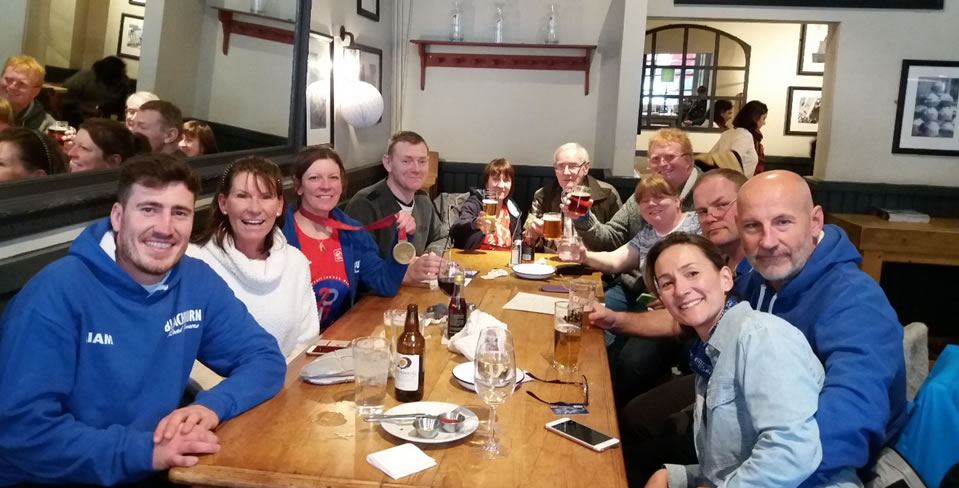