Runner of the Month: Gary Blackburn
Committing to the Club Parkrun Alphabet Challenge and finishing the first in 26 weeks with a different location every week (bar one) visiting Poland and Ireland.

Club Member of the Month: Trevor Jowett
For his service and time at the Ironman doing the ‘jobs’ that weren’t pretty!! Got on with it without a mention and kept a smile throughout.

Special mention to our Ironmen this month particularly Liam Hindle who did a brilliant first one and all the people organising events, The Clucas’s and Kathryn Gardner. All the nominations below are worthy of the awards and deserve equal praise !
#BRRStrong 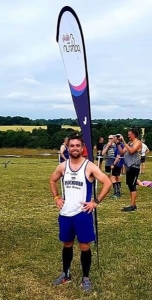 1.My nominations are christine Warrington for runner of the month, she pulled an amazing race outta the bag at elswick and also ran Wednesday in Lancaster with nat and Andrew

Mom for me has to be big trev , he was amazing at IM ensuring all water stations were kept filled up and volunteers were happy .

He went way above and beyond keeping the toilets clean even after 1 lady had proper left it a mess ( she was a mess when she went in mind , i swilled her down with buckets so she could be on her way ) .
He didnt just throw water at them he actually wiped round with disinfectant athletes were commenting how clean they were .

2.ROM – Liam Hindle for a great Ironman effort
MOM – Trev for keeping those toilets clean on the IM course!

3.Rotm – difficult one this because of all the amazing achievements but I’m nominating Liam Hindle. I’ve chosen Liam because I have seen the determination he had whilst I talked him too death on the gym bikes. His training regime what out of this world and I admire anyone who completes such a challenge.

I would like to give a mention to Ben, Mark and Jimmy for their Ironmen achievements.

MOTM – Sally Heppenstall. The support this lady gives to her family is amazing. She is also so caring for other runners when they are injured. Her dedication of supporting role doesn’t go unnoticed. She is also a truly genuine, kindhearted person/runner. How many hours must she spend being a supporter. She is amazing. She believes in others and you can just feel that from her.
Tracy Davies

4.ROTM – Liam Hindle
Absolutely smashing his first Ironman, he has inspired and ‘wowed’ so many members. All of the training and efforts that he put into the event beforehand, showed his passion and determination to achieve well. Then, just having us all in awe on the day. Massive respect.

MOTM – Kathryn Gardner
Organising the Club Handicap event was obviously no easy task, but she managed to do so with a very positive outcome. Seeing the work that went into it and all of the pictures and results, it was such a highly successful event and one that Kathryn absolutely ‘nailed.’ I was gutted to not be a part of it!

Massive kudos also to Gary for completion of his parkrun Alphabet Challenge, Chris Almond for all of his recent PBs and also Graham Jordan for organising the Scafell Pike climb.

MOTM
Kathryn AG, the handicap maths blows my tiny mind. I can’t even explain how it works never mind organise it.

6.Runner of the month Liam Hindle for Iron Man.
Member Joanne McLean for all the hard work in organising the Iron Man feed station.
Kathleen Brayshaw

7.ROM – Liam Hindle for his Ironman

MOM – Kathryn Gardener for her organisation of the BRR handicap race

8.Run of the month Karen Rishton, she is gaining some amazing times and lots of PBs. Her sub 50 on her last 10k was an outstanding achievement.

Member of the month George Bell, he shows kindest to everyone and is always there to offer support and advise

9.Another great month of running by all well done especially lately in this heat.
My ROTM is Liam Hindle, an awesome effort doing the Iron man event
My MOTM is Graham Jordan, doing so much for his charity and this month organising the walk up to Scafell Pike
Chris Hardy

10.Rom
Chris almond just getting faster and faster and a great guy too

11.Nominations for this month are;

Gary Blackburn – For completion of the Parkrun challenge and also for completing it so soon in the year. Special mention to Hayley for finishing not long after.

MOTM – Kathryn Gardner for arranging the club handicap race and all the calculations that go with it. Special mention to John Clucas for arranging the Grand Prix. Pity the events weren’t in separate months so that they could both get a MOTM.
Matt Lynch

12.
My RoM
Ironman Liam Hindle, a trio of a achievements in one massive local event. Epic..

MoM
Gary Blackburn, the first to complete the club parkrun alphabet challenge in such a short time.. great commitment to the challenge..humble, pleasant and encouraging to others.
Well done Gary

MOTM – Gary Blackburn for his dedication to the club alphabet parkrun challenge and being the 1st member to complete it.. well done Gary!

14.But runner of the month for me has to be Liam Hindle. Smashing Ironman and showing us exactly what can be achieved with hard work and dedication.

Member – David Craig. David’s ran (so far 27th July) 107 miles this month and I think goes very unnoticed. David’s been fantastic in getting me back out running and sticking with me on my runs and keeping me believing ! Thank you David 😀
Katie Haworth

15.My nominations for July
MOTM Nickie Ohara for organising the tour around Blackburn wall art. I really enjoyed it and was very informative and interesting.

ROTM Christine Warrington for coming back from injury and her goal was to be able to run a 10 mile race. Which she did at Elswick and smashed her pb by 5 mins. Then the Saturday after goes out and smashed a sub 30 at parkrun.
Thanks
Amanda Burrows

16.ROTM :
Christine Warrington. She is back…and she is on fire!! PB after PB and she achieved her goals for this year. So proud of you Chris x

Kathryn Gardner for organising the Handicap this year.
Rose Kay

17.ROTM: Gary Blackburn for completing the Parkrun Alphabet Challenge. Congrats to Gary for storming the challenge… and so quickly as well. I’m super-impressed by his level of commitment and brilliant running.

MOTM: Claire Bridge for becoming a First-Aid volunteer for the St John’s Ambulance, following them attending to her son during a race. It is so admirable to commit to giving something back and helping others. She’s an inspiration and a credit to the club.

19.MOTH: Kathryn Ashcroft-Gardner for her work on the BRR club handicap.

ROTH: there have been some inspirational runners his month especially our Iron Men. One name keeps jumping out on the PB hall of fame, Gail Bamber who has become a fast speedy girl on and off road, some amazing times achieved, well done Gail.

20.Ben Johnson Runner for his awesome iron man result and the training of the others.

Kathryn Gardner for member for her very well executed handicap race and crunching numbers up to make it as fair as possible.

There’s been so much positive stuff this month, with lots of people getting better and better and lots of volunteering of spare time from people. Well done everyone.

21.Runner: Liam Hindle – amazing first Ironman and a pleasure to look after through the feed station
Member ; Kathryn Ashcroft-Gardner for an exceptional event the club handicap, massive thanks to John and Debs also for setting up the Grand Prix

22..It’s been really tough to choose this month, lots of great running. However, ROM for me is Karen Rishton. PB’s galore! 10k PB and multiple 5k PB’s through July. Really strong running.
MOM for me is Dave Short. Dave is one of the most supportive runners. Everyone knows he loves a bit of banter, but on the flip side he always looks after back runners and offers loads of support. More so this month on the off-road runs.
Thanks
Carla Jenkinson

23.Rotm this is a no win situation Gary Blackburn you smashed the alphabet so dam proud of you dude .
Motm
Deborah clucas were ever you go she gives everyone encouragement and is a role model for couch to 5k
Tracy Slater

24.ROM Karen Rishton lots of PBs and got her first sub 50

25.I’ll nominate Gary Blackburn for the completion of the Parkrun alphabet.
Great achievement and getting faster all the time.
Hayley’s now done the same so she deserves an honourable mention too.
Think a new challenge is now warranted😉
Matt Taylor

Club Member & Runner of the Month August 2019
Scroll to top