Runner of the Month : Michael Cluclas
A superb PB at the Barcelona Half to cap off some improving times over months of training and hard work

Thanks to all who nominated so many worthy members as below: 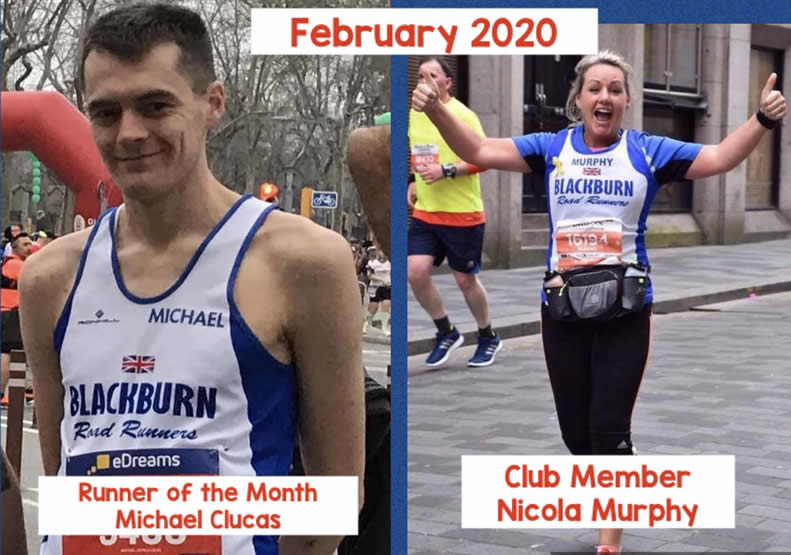 1.
ROTM for me is Donna Mazur who is absolutely flying lately with pb after pb
MOTM is Nicola Murphy for organising our WW, well done

2.
Runner: Has to be Michael Clucas for his amazing time at the Barcelona half, loved the fact he beat a few surprised Harriers!
Member: Wayne Rushworth who gave up his own time to help clear the Hyndburn Parkrun course at the weekend when everybody else seemed to be out running in events.

3.
ROTM – Veg powered Alex. He’s really smashing it this month again.
MOTM – Has to be Murphy. She worked so hard on the Winter Warmer for months. Not a lot of people know what goes into organising and planning this event. I certainly do now. TOP job Murphy 👌

4.
ROTM – Michael Clucas stormed Barcelona, even put Harriers in the shade absolutely awesome time.
MOTM – There are quiet a lot of people that all did an amazing Job on putting on the Winter Warmer and making it yet another Success. But my nomination is Linda Wilding for organising a meal out to fit us all in especially on valentines day,and in Barcelona, but she did it and what a fantastic meal we had x

5.
ROM = John Hannon , for all his crazy running he does and encourages others to join in!
MOM = Rick Slater , for helping lots of runners achieve their PBs
Donna Mazur

6.
Runner of the month would be Chris Joliffe – amazing sub 2 Barcelona Half Marathon- Chris is an inspiration after recovering from his stroke he has totally changed his lifestyle and his running progress and distance is amazing, he has gone from strength to strength and he goes out of his way weekly to support Progression Group 2 each week as well as fitting in BRR runs and loads more well done Chris – a true gent and an inspiration to us all

Member of the month in my view Wayne Rushworth supporting Gill and running the Barcelona Half Marathon with her and he is always there cheering people on and supporting others, and his contribution to the Hyndburn Park Run re development and clean up is brilliant giving up his time for a great cause

Member of the month: Wayne Rushworth for his tireless volunteering especially with his recent work at the rebarking of Hyndburn Park Run.
Runner of the month: John Dey, he has been working really hard to get back to his old form and had a cracking race at Lostock 6 on Sunday!

8.
ROTM – Chris Almond. Underwent a major op just before Xmas and was out for around 6 weeks. He’s come back just as strong and is banging out those pbs. Great come back Chris.
Motm – Vikki Jones. Fantastic member, always willing to help out not only on the social side but is so helpful on all runs. She even provides funds for a shop stop. Come in leaps and bounds in her running and is a good all rounder.

10.
Runner – Lynne Knowles. She has been amazing this February, but Lytham, Barcelona you name it she’s come on leaps and bounds since I’ve been with the club.
And February has easily been a stand out month of hard work and achievements, going strong and only going to get stronger – Keep going Lynne !!!

As for the – Member of the month, I think this easily has to be Nicola Murphy. Her dedication, hard work, teamwork, support, and great organisational skills bringing the Winter Warmer 10K 2020 alive and making it the success it has been – well done Nicola and true inspiration and definitely set the bar

11.
Runner, Alex Curran, a fantastic runner, smashing his times every race and a real helpful lad too.

Member, Nicola Murphy, awesome winter warmer, put it all together for us and I didn’t see her lose her cool once. An amazing effort.
Graham Jordan

12. My nominations for this month’s awards are:

Runner: Reanna Taylor for running a 47:55 PB at Stanley Park 10k. An absolutely superb time and improvement and I know she’s working hard on her training plan.
Member: Jane Matthewman for all she does for the Winter Warmer.
I know Nicola Murphy will deservedly receive lots of noms for being the run director, and I nominated her last month for all her hard work, but for me, Jane is the unsung hero of our Winter Warmer race. She tirelessly answers tonnes of entrants’ queries in a friendly & timely manner whilst also having a full-time job, she sorts out all the numbers with John Schofield, makes sure everyone who wants a place gets one, ensures number pick up on the day runs like clockwork and a million other things that we don’t have to think about because she just quietly gets on with them. The Junior registration is a doddle for us, because she literally hands over a pack full of stuff that’s been expertly prepared to make things quick and easy. She really is a font of knowledge and experience and I think the race would be much poorer without her.

ROM – John Hannan running Pendle Way in a Day. What stamina he has to be able to cover that distance in those awful weather conditions. An inspiration to trail runners. Well done John.
MOM – Nicola Murphy for her leadership as Race Director, Winter Warmer. Lots of pressure for everything to run smoothly, which it did. Fantastic job Nicola.

18.
Rom – Hate doing this one but has to be Michael Clucas running super sBarcelona half in 1:17
MOM – Nicola Murphy
I know first hand the hard work that goes into being race director and Nicola took over the reins and did a super job well done Nicola

Member OTM: Nicola Murphy – for her brilliant organisation of the BRR Winter Warmer and staying calm, helpful and cheery throughout.
Special mention to Nickie O’Hara for back-running the WW and running to the finish with the rather awesome June, showing true club spirit from start to finish. Also, well done to the cake bake and massage team for raising so much valuable cash for Prostate Cancer.

ROTM – Michael Clucas
Flying past a local club cool as a cucumber in Barcelona to finish with a PB gets my vote with an awesome time in Barcelona. Mega kudos to John Hannan on his massive achievement completing Pendle in a Day in tough conditions.

Member – Nicola Murphy
I saw the amount or organisation and prep that went into the Winter Warmer by our Race Director . She pretty much missed a week of paid work in the run up to make sure it all ‘ran’ smoothly. It was like clockwork and enjoyed by all competitors and volunteers- making tweaks to Johns phenomenal foundations. A really awesome effort done quietly and without fuss- making the uninitiated think the job is easy!!! Again a massive mention needed to a member who went above n beyond in Feb, Wayne Rushworth who volunteered to help Hyndburn Parkrun on his own lay paths when they put a request out!

Runner – I make no apologies as I nominate my son Michael for his phenomenal performance in the Barcelona half. Once he said he had overtaken a couple of Blackburn Harriers in the race and they had a double take that just made my weekend,
Member – Again I have to declare an interest but I nominate Nicola Murphy for the way she has taken on the WW. We had record profits and the manner in which she picked the right people to lead the teams was a great move. Pacing Teams were perfection and the best bag drop facility at the WW ever.

Club Member & Runner of the Month March 2020
Scroll to top