Runner of the Month: Lisa Ingham
Won her age category in the Golf Ball Fell Race Series and ran well throughout the month in mid week trail races.

Club Member of the Month: Lesley Dewhirst
Who organised the Club Treasure on the night for 50+ members. 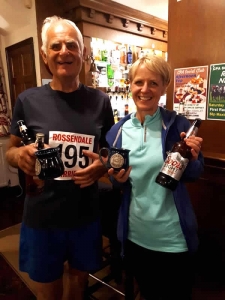 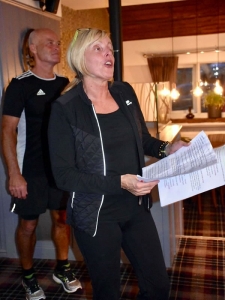 1. ROTM – Mark Vaughton for his recent marathon. Mark is like a machine, he just keeps running
MOTH – Chris Almond. His support, as always is incredible to us all who are in training at the moment.

2.ROTM: Carla Jenkinson – This girl is going from strength to strength at the minute. She has had an amazing month of committed training and has improved vastly within this time too. Not only has she been determined and focused in her own training though, she has also supported others in theirs and has organised extra sessions for others too. Very proud of her, as she’s had such a busy month even without all the extra training that she’s done! Keep it up!
MOTM: Ben Johnson – Ben organised a very successful group session, introducing members to a this brick type of training. Many of us are fairly new to triathlons and he really helped to put everyone at ease. A great bike and run session delivered, even with sweets, chocolate and flap jacks to hand! I know, that I and many others are grateful to have received this knowledge and expertise before our upcoming triathlon. Not only that, but he’s even sent out extra advice to everyone too!

Shout out to Lisa Ingham, as she’s completed some amazing runs and achieved some great things this month, too.

3.MOTM: would like yo nominate Lesley Dewhurst for sorting out the treasure hunt event, it was great fun and well organised. Big thanks to Eileen for sorting out tape so we didn’t get lost x
ROTM: A lot of great speedy parkruns, 5ks and half marathons this month but my vote goes out to Lisa Ingham for her tough felling running, winning 1st in age is massive for BRR as I think its easier to run a marathon than run some of these fell runs, they definitely take every bit of strength you have. Lisa just seems to breeze through without breaking a sweat. Caroline Slater is also running extremely strong at the moment, she’s one to watch at her next race.

4. Can I please nominate; Gail Bamber for runner, she is on fire with her running ATM, smashing PB’s, member to Carla for supporting all the runners in their bid to become tri athletes and represent the club doing so. 👍

5. My nominations for August
MOTM – Lesley Dewhirst for organising and sorting food orders for the treasure hunt. And not forgetting the ladies who also helped thank you. I really enjoyed taking part and the food was lovely too.
ROTM – Rose Kay who has been chipping away at her parkrun pb’s. Either course pb’s or overall pb’s.

6. ROTM – Jane Matthewman for winning her age cathegory at Riverside Lancaster Half marathon.
MOTM – Norma for setting up Treasure hunt.

7. ROTM is Amanda Burrows, massive congrats on her 50th parkrun
MOTM is Tracy Davies, organises the Manchester half marathon training routes every week and such good routes too

9. As I’ve been injured the last month I’ve been watching from a far. Re the runner of month I’ve seen the miles both Andrew Gardner, Jason Rip and Jon Turner have put in this month. Two of which were abroad when they did it. I’m in awe of all three but my nomination goes to Jon Turner who’s as determined as I’ve ever seen him to reach his goal. Fair play pal, reach for the stars you’re a top runner.
MOM goes to Ben Johnson who continues to inspire BRR club members to achieve their goals in triathlons. It’s inspired many to try and succeed. Respect, take a bow 🙇‍♂️

10. ROTM – Lisa Ingham for the fantastic fell running series she’s completed and that brilliant age cat win!
MOTM – Lesley Dewhirst for the treasure hunt, what a brilliant night on my birthday! (Thanks also to Lesley’s helpers, excellent organisation as always!)

11. ROM – Amanda Burrows 50 Park Runs Ana coming back strong! Great running and lots more to come
MOM – Ben Johnson for taking the time to support members in their tri events, I know there is a business end for Ben but he’s been super supportive to all whether you want to follow up with coaching or not including tips, advice, and even equipment loans! It’s brilliant when members share knowledge and experience

It’s been another great month for the club!

12. ROTM – Christine Warrington – Her process in the last few months has been fantastic x
MOM – Not usual for me to do this but it goes to the hubby – John Clucas
Working tirelessly on couch to five k, already left this morning to coordinate the celebration run!
Missing his parkruns as a result( he is nearly at his 100th)!
Litter picking all the time and mostly unnoticed

13. ROM – Judith Barnes. Judith just quietly gets on with her running/training and completed her 1st tri with such determination. She always thinks of others and their running too.
MOM – Ben Johnson. Ben organised a BRIC session for all abilities. It was a great insight to how it all feels and such a well organised event. He even brought drinks & goodies. Perfect

14. ROM – Lisa Ingham- she’s really made it her month with winning a Trail Race series and making it a family affair with her dad.
MOM – Kieran McBride for making a super cake for the club presentation after only being a member a few months. Always at the club and very sociable. Massive round of applause to Norma and Lesley for the club treasure hunt it was brilliant !

15. ROTM – Hayley Duckworth, for outstanding running and completing the PR challenge
MOTM – Lesley Dewhurst, for organising the Treasure Hunt, such a fantastic event

16. My nomination for ROTM is Caroline Slater her efforts in the fell races this month was fantastic finishing 3rd in her age category
MOTM I’d like to nominate Tracy Davis for hard work with the half marathon crew planning routes even when she can’t make them herself
Special mention to Lisa Ingham brilliant running at the rossendale fell series winning her age category.
Finally to the new tri peeps awesome achievement for each of you all

17. ROM for me has to be Shaf on his track marathon! Amazing stuff.
I’d also like to mention here Jon Turner, who is absolutely smashing his marathon training plan, and loving it!

MOM – Ben Johnson. He has been brilliant with all of his triathlon support, from the brilliant taster day that he did, to sharing nutritional information and post-tri messages of congrats.

18. Member of the Month – Lesley Dewhurst

I’d like to nominate Lesley for the fantastic job she did on the Treasure Hunt run, it was a great event and our team absolutely loved it! Special mention to the other members who helped organise it too.

Runner of the Month – Gail Bamber

I’d like to nominate Gail for her all her hard work and dedication whilst training for the Triathlon. Not only had she not been on a bike for 30 years she has also only learnt to swim a short while ago too – seeing her on the day you’d never have know as absolutely smashed it! What an inspiration.

20. ROTM – Would like to nominate Ged Johnson. Ged has made a massive come back from Injury and is going from strength to strengh showed on is resent Tri .
MOTM – Carla Jenkinson improving all the time and arranging the Netball team and getting fab results.